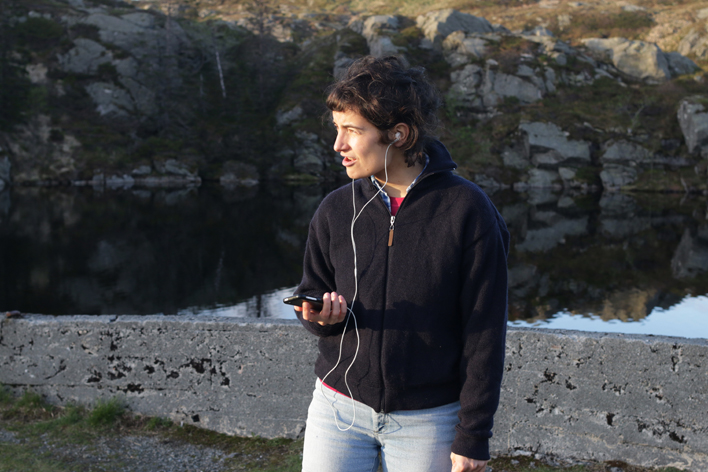 A study of the straight arm and a pointing finger

Commissioned by Pröverommet Bergen in collaboration with Galleri Krondborg and performed as a part of a walking exhibition at the Flöjen mountain in Bergen, Norway.

The performance is based around verbal and physical storytelling approaching physical and verbal defense and ideas about moral purity. The work has four main conversation and scores.. The first conversation is an investigation of positions that straight arm can take and the women’s share their experience of physical self-defense.

The second conversation is sung. The women sings along to Devendra Banhart’s song Taurobolium and tries to exist as supportive choir to each other. They tries to remember the lyrics from the song which are talking about the impossibility to stay away from evil and that think around ideas of moral purity.

The third conversation is performed as physical noise making in relation to a song about a crappy body written by the artist.

The fourth conversation explores everyday intimate gestures performed by arms, such as hugs, arms around the shoulders, holding hands and is performed together with a verbal conversation about verbal self-defense.

The work is an attempt to create a space in which woman can share their experiences of physical and verbal self-defense. Important for the performance is that a range of voices, both physical and verbal, are allowed to exist at the same time throughout the performance as a way to observe pluralities, intimacy and shifts between individuals. The performance also relate to the position on the mountain which used to be a military base and a point of defense during the Second World War.